Former elevators in the southern states would be razed to make way for a mixed-use development project of up to 20 floors. (BizSense File)

Three planned projects – two south of the river and one in Shockoe Bottom – progressed in the city on Monday.

The City Planning Commission voted to recommend the rezoning of the Southern States Elevator site at 2-4 Manchester Road and a surface lot at 1801 E. Main St. in Shockoe Bottom. The commission also recommended that a special use permit be granted to 1005 Westover Hills Blvd.

Hourigan Development plans to raze vacant silos to make way for mixed-use development that could include residential, office or hotel uses.

The exact uses for the building, which could reach up to 20 stories and span nearly 600,000 square feet, have not been determined.

But at Monday’s meeting, Hourigan’s attorney, Preston Lloyd of Williams Mullen, said they had received “great interest (in the project) but could not move forward with the non-zoning deliberations in square.

Hourigan’s rezoning request includes an offer that the development company would make a series of road and infrastructure upgrades to increase access to 2-4 Manchester Road.

“There’s a risk that we won’t agree to any of the infrastructure improvements and ask for a (certificate of occupancy) and have a bridge to nowhere,” Copple said. “We want to make sure this is done before we receive any type of building permit.”

Planning Commission Chairman Rodney Poole responded by saying, “If you force them to make these improvements before you get a building permit, you pretty much guarantee that this project won’t get built.”

After nearly an hour of deliberation, the Planning Commission voted in favor of approving the rezoning request. 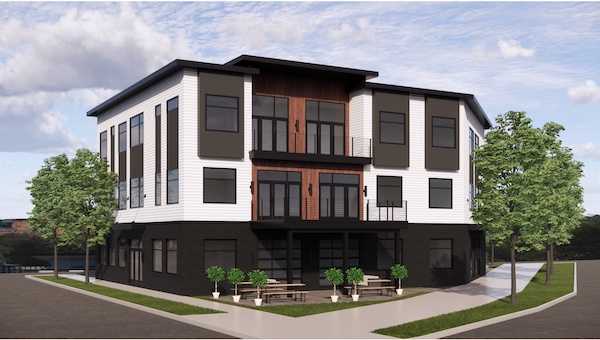 A rendering of the mixed-use building that would stand at 1005 Westover Hills Blvd. The apartments or condos would be located above the commercial space on the ground floor. (Courtesy of city documents)

Also on the south side, developer Zach Kennedy’s application for a special use permit at 1005 Westover Hills Blvd. also received the blessing of the Planning Commission.

Kennedy and his wife Danielle purchased the 0.25 acre triangular lot that is currently green space at the end of 2019 for $ 72,000, and are looking to construct a three story building with commercial space on the ground floor in below 12 dwelling units above.

“So what we’re trying to create is a hub for the neighborhood where people can walk, possibly have an office to rent and have a restaurant on the first floor where neighbors can enjoy the commercial side of this. area, ”Kennedy said.

Finally, the commission also approved a rezoning request for a surface lot at 1801 E. Main St. in Shockoe Bottom.

The half-acre land sold for $ 1.87 million last fall to Samuel Spiritos, a lawyer based in northern Virginia with Shulman Rogers, who is also involved in the development.

Spiritos, in collaboration with developer Thomas Gravely, is seeking to change the zoning of the land to TOD-1 Transit-Oriented Nodal District. Their exact plans for the package were not disclosed, although their attorney, Rob Benaicha de Hirschler, said in Monday’s meeting that they were planning a “high-quality mixed-use project” and that they were doing so. were in the early stages of its conception. .

“They are very excited about Richmond. They’ve been studying it for six years, ”Benaicha said.

They included an offer in their rezoning request that would limit the height of the building to 11 stories, one less than what TOD-1 allows.

“Twelve is a discouraging number for many people, but we think 11 is all the density we need to successfully develop this site,” said Benaicha.

The 12-story height limit did not seem to intimidate Commissioner Vik Murthy, who said it would be good to approve the request without the 11-story supply.

“As I look around the city and keep pushing, we are limited by the amount of real estate we have. We need to maximize those real estate when we have the opportunity to innovate there, ”said Murthy.

All three questions are now due to be heard by city council at its May 24 meeting.

The Commerce Department assessed around 1,000 business ...